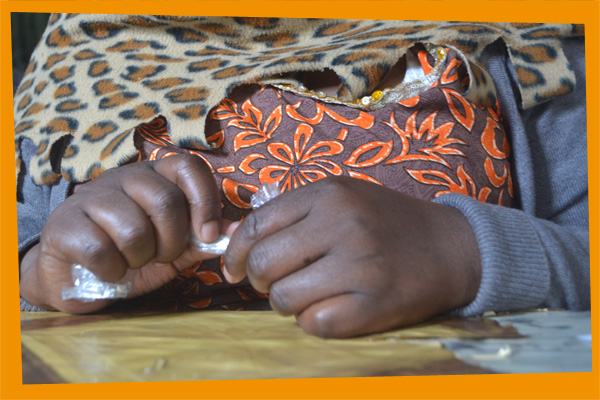 «Women need to be in power because women are powerful and very bold.”

I was born in Kibera and then I moved up country with my family. When I came back to Nairobi, I ran a community-based organisation (CBO) in Dandora to empower women on their human rights, in particular gender-based violence and defilement cases. We also taught entrepreneurship because we used to build women’s skills so they can survive on their own.
I was once in an abusive marriage. The root cause was financial. I used to lie down on my bed asking myself ‘how many young mothers do we have who are going through what I am going through and cannot speak for themselves?’ Poverty and domestic violence pushes most of the girls into prostitution and children to drop out of school.
Since I established the CBO in Dandora, I started speaking with the young girls and they would share with me all these stories. Many of these girls and young women would be married and they would not realise their husband was a criminal until they would find out he was shot dead during a crime, like a bank robbery. In March 2007, I wrote an article about a young woman who was the wife of a wanted man and who was denied access to hospital care when she was in labour because of her husband. In the article I asked ‘how many women don’t know who their husband is?’ and I mobilised over four hundred young women to share their stories.
After that article, I tried to get elected for a political position as a MCA so that I could fight for these girls. I didn’t get it because it was not easy as I am a woman. My opponent tried to use what I had done with empowering women against me and said that if people elected me I would not listen to men because I advocate for the rights of women and girls.
I had about seven men jailed because of incest and defilement cases. I would ask the police after an extrajudicial killing ‘why are you killing these young men?’. It was very heavy for me because I had all of them against me: the police, the perpetrators and the men committing domestic violence. Sometimes, you have taken a report on defilement to the police, the perpetrator has been brought in and booked, tomorrow you go to the police station and you find the perpetrator has left and that the case is already compromised. When the perpetrator is outside, what happens with your security? People attacked my office in Dandora and a vehicle with no number plate would follow me at night. I was held at gunpoint and on the same day, seven young men seriously battered my son.
I was born an activist and I am a role model. Women need to have something by themselves so that they are not vulnerable. As a changemaker and a peacebuilder, I always look around at these problems in my community – politically and socially, because there are people today who don’t believe in women leadership. Women need to be in power because women are powerful and very bol