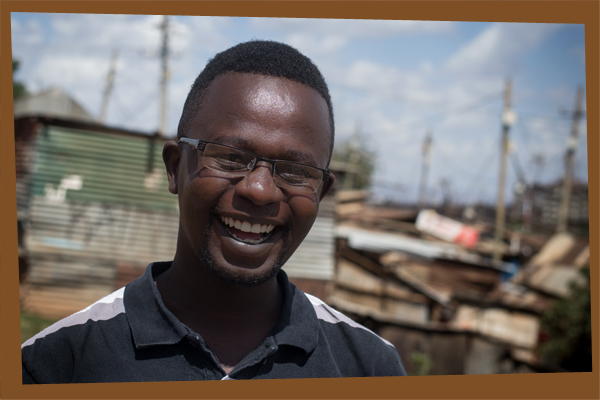 Growing up in Kibera is challenging, especially as a young boy. 99% of the guys I grew up with are dead – mainly because of crime. A lot of young men do drugs, or get involved in the world of drugs. And basically, once you get involved with drugs you have very little choice but to venture into crime. Nevertheless, it is still a choice. Many people do drugs because of peer pressure – and there is a lot of peer pressure where I come from. But still, if you really don’t want to, it’s ok. Ultimately, no one will force you to do it.

My father died when I was very young so my mother was the one who took care of us. It was so tough. We lived in a village called Gatwekera and, at that time, it was a very dangerous village. My mother was a nurse. Sometimes young men in the neighbourhood would be shot and would come to my mother, asking her to remove the bullets and to tend to their wounds. I used to see my mother doing that.  She really did a lot of things to change Kibera. My mother died but she has been a great inspiration, so you could say I am following in my mother’s footsteps. She is one of the founders of Carolina for Kibera; a local NGO that develops local leaders, catalyses positive change and alleviates poverty through various programmes. Now, I can proudly say that I do communications work for Carolina.

One thing that is unique about Kibera is that we are always united. If you have a problem, everybody from the community will come to help you. I think that Kibera is more popular with NGOs than other slums because it is the second biggest slum in Africa and it has a lot of problems. Kibera has changed a lot because of the number of NGOs that work here. They really do a good job. Some talk to youths, some mentor youths, and some set up support groups. Just seeing what the youths are going through, I feel that I am in a position to change that. I do not like young people being shot at and dying in the streets, or ladies being molested. It’s not right.

I went to primary and secondary school in Ukambani. After high school I studied community development at a college in town. Then I did a film production course. The knowledge I gained has helped me to cover stories of human rights violations. Sometimes I partner with women who are working as community health workers and they call me when something happens in the community. I share these stories on YouTube, for example. I think that these tools can be used for social change. Mostly when you want to do a story in a slum, it’s tricky, even when people know you. They see you with your camera and will want to take it from you. That is the most challenging. So far though, I am lucky, I have never been threatened.

I think the situation in Kibera might get violent during the upcoming elections, because mostly the violence in Nairobi starts in Kibera. The likelihood is high that if the opposition leader does not win, there will be fighting. During protests the police are known to beat people and rape women – that scares me. However, I believe we can educate people through community forums.  Mostly the youths are the ones being used by the politicians; they are given 200 KES (equivalent to 2 US dollars) to go riot. If someone can tell them that the 200 KES is not worth risking their lives, then things can change.

As a Toolkit Organiser I feel I am given the right platform to support the rights of women and children in Kibera. It will not cost me anything because my background is community development and it is my responsibility to change my community. In the next few months I hope to see change, and I hope that there will be more support from the government for human rights defenders. What makes me happy is when I do something to change or help someone; when I see results. And yes, I do see results.