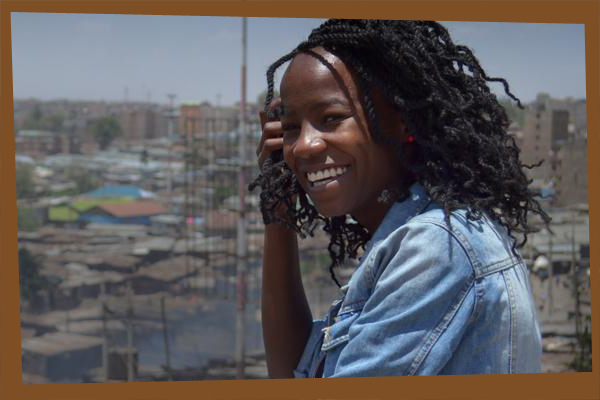 I come from a family of four daughters. My father was never really in the picture, but I never felt the absence of a father-figure in the house; Mama has been such a role model in that sense. She would say “whatever you want to do, you can do it”. Whenever we would complain about not having a brother to help us fix household things, she would push us to learn how to do it ourselves.

Growing up in Nairobi was both very challenging and frustrating because of the way women are treated here. My mother shielded us from much of the violence against women in our society but I began to notice these things slowly as I grew up. From that moment, I started to have a strong opinion and became very vocal on the issue of sexual and gender-based violence, though I came to realise that no one likes a militant woman [laughs]. Being called a “hooker” by the police because I am walking alone after 9pm in a neighbourhood like Westlands [an affluent neighbourhood in Nairobi] and having to beg them not to take you to jail and feeling nervousness in my heart for my safety when I am walking home at night are just some of many examples of how harassment affects your day-to-day activities. At times you just do not want to leave your house or take the matatu anymore because no matter how you look, how you dress or how you speak to people, women are targeted because they are women; this is such a normalised issue here that, at the end of the day, many cases of harassment go unreported. Girls and women of all ages have to learn how to protect themselves. In Mathare [one of Nairobi’s biggest urban settlements], for example, women old enough to be grandmothers are learning self-defence to protect themselves from rapists.

My passion to work in the human rights field was sparked when I was sent to study in a high school for underprivileged Maasai girls, in Kajiado County. That is when I realised how lucky I had been in life and how hard work can really pay off, regardless of one’s background. Back then, one of my sixteen-year-old classmates dropped out of school because she got pregnant but the other girls were not surprised at this. I then did some research on this issue, trying to find out how to help certain girls from certain communities and I befriended some people in Narok who were rescuing girls from early marriages and putting them in school.

When I joined Law School in 2010, I got to read and understand every single aspect of the Constitution and basic human rights. Then, during my second year of College, while as I was carrying out an internship in an organisation that deals with community sanitation and hygiene, I went to Mathare for the first time. As you go deeper into the settlement, you see the vast disparity between Mathare and other parts of Nairobi. The more time I spent in Mathare, the more I realised that everyone ought to have the same rights and the same opportunities as people elsewhere in Nairobi. If you look beyond the stereotype of Mathare as being a “collection of slums” or “one of the oldest slums in Africa”, you see a vibrant community of people who are just looking to make a living. Of course, some things need to change, but there is nothing wrong with being from Mathare[1].

After Law school, I decided I wanted to use my skills for people who cannot defend or protect themselves. That is when I came across Nonviolent Peace Force (NP), an international organisation that works on civilian protection. I made the leap and spent a year in the Philippines working for this organisation because I was eager to see in practice how civilians can receive effective training in order to protect themselves. What I loved most about working for NP was its principles of non-violence and non-partisanship, and the fact that the local partners are considered the most important people pushing for change. One of my motivating factors as a human rights defender is interacting with the communities and helping them to come up with ways that they can change situations or advocate for their rights and needs.

I wish that women human rights defenders, as well as the issues we fight for were better acknowledged. There are so many people, women and men, who are doing their best to protect girls and women in their communities whom we never hear about. Being a woman human rights defender can be demotivating at times; I sometimes feel that nothing will ever change and I ask myself: “Who am I helping? How is this helping?”  However, I can definitely say that being part of this group of Toolkit Organisers has been a wonderful experience so far because I get to share, work and network with like-minded and inspiring human beings with strong voices, who never back down regardless of the numerous obstacles that come their way.

[1] Maria is an active member of Mathare Social Justice Centre.

One of my motivating factors as a human rights defender is interacting with the communities and helping them to come up with ways that they can change situations or advocate for their rights and needs.